Here's the first full draft of the Ride to Cumberland 2023 bike ride plan.

I'll let it lie fallow until the New Year, when I'll be asking for further expressions of interest, such as I can make an estimate of the number of motel rooms required.  Any comments or suggestions in the meantime will, as always, be most welcome.

As a first step in pulling together an acceptable plan for the first phase of this planned ride, I thought I'd seek your thoughts and comments on the cross-Kentucky component.  The schedule below contains the plan to date, none of it set in stone but something I compiled and which has passed initial scrutiny by Bruce.  It is in fact a somewhat moderated version of the 2012 route that some of you enjoyed so much!  My currently-preferred start date remains 16 September, 2023. 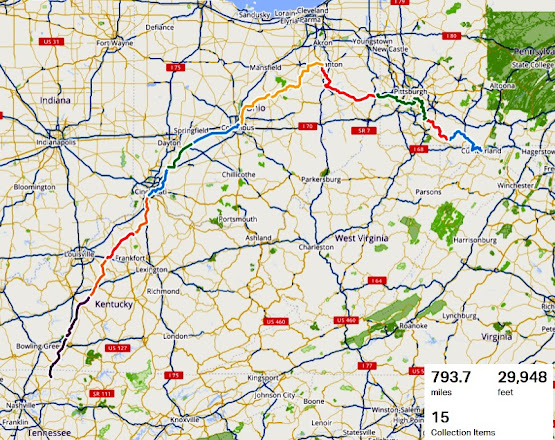 Once we have gauged the group's reaction to this first sector, Bruce and I shall consult on the Ohio trails content from Cincinnati, and the cross-Pennsylvania trails (including GAP) to Cumberland, before reaching out to you potential riders again for your input on the results of our deliberations.

Look forward to hearing your opinions!

14-day trip: across Kentucky, across Ohio on the Ohio to Erie Trail, from Weirton to the GAP 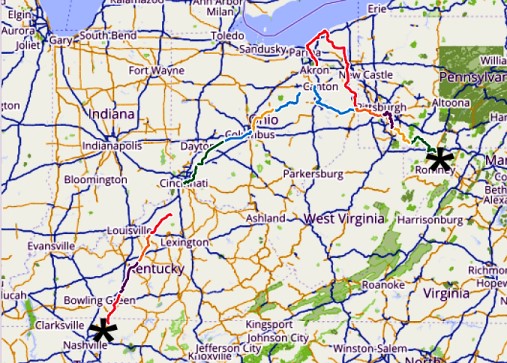 July 2022
Email ThisBlogThis!Share to TwitterShare to FacebookShare to Pinterest

Thanks. I was unaware of the request to Cleveland. I’ll watch you guys as you put the plan together.

My main point was that this group's route continues north on OTET, whereas your 2018 route heads east on USBR50 from Columbus, after sampling the trails that overlay the OTET (Little Miami, Prairie Grass Trail etc).

As I recall, Bruce opined that he'd like to go north to parts of Ohio not previously visited, especially Cleveland.

Bob, As I tried to make sense of what Mark Metz was trying to relate in his journal, I thought of enough similar journey that was much easier to follow.

Early days of this journal but it may prove useful as the trip unfolds.

I am flattered to be included as a destination point! However, I feel obliged to mention a few noteworthy items. "Berkeley Springs Motel" was an active budget motel up till a year or so ago, when it ceased moteling and changed to budget apartments. I drove to BerkSpgs this evening passing by the location, and their sign now identifies it as apartments. I see via Google it is still advertised as a motel, but as DaveS and I learned to our dismay re Amanda's Restaurant in PawPaw, just because it is listed on Google it's no guarantee it is still active as such; we found a handwritten note taped to Amanda's entrance door "Closed Permanently". My suggestion is to consider the Country Inn, a bit pricey but it has an excellent restaurant for all meals and an attractive setting next to Berkeley Springs Park.

There is a Best Western Motel on the south side off of Hwy 522, and I understand there are some rooming houses in the downtown area. Wherever you decide, be sure to make your reservations well in advance of the BerkSpgs annual Apple Butter Festival.

Another item is where to end the tour. PawPaw is about 25 steep winding miles on Route 9 to my house, and another steep winding 8 miles to BerkSpgs also on Rt 9, a bit narrow and no shoulders, suggest avoid biking on it.

If you end the tour at Hancock and don't want to spend the night at the Super8 Motel there, BerkSpgs is about 16 miles westerly on Hwy 522 which has a paved shoulder in a few places. Also a 9% climb after you cross the narrow two lane no shoulder bridge across the Potomac. Lots of traffic, much of it tractor-trailers which use 522 as a shortcut to Winchester VA and to I-81. The traffic has been so heavy for so many years that the WV Hwy Dept a few months ago began construction on a bypass around BerkSpgs. Again, not an attractive bike route.

As you observed elsewhere, Cumberland has attractions as an end of tour destination, and I can't think of any negatives, unless some in the tour group are really lusting for the C&O Canal towpath experience. But even that lust could be accommodated, since the towpath ends at Cumberland at Mile 184.5, and the famous PawPaw tunnel is at approx Mile 155, so one could spend an extra day in Cumberland and do a leisurely 30 mile oneway towpath ride to the tunnel with vehicle pickup in PawPaw, or a more frantic 60 mile round trip.

Well, just food for thought. As your plans crystallize, let me know if you would like me to verify possible lodgings and restaurants etc, since Google apparently does not require truth-in-advertising updates by their clients.

Be aware that Amanda's Restaurant in PawPaw is "Permanently Closed", as we recently discovered to our dismay. One hopes it will be reopened by this Fall or next year to accommodate all the numerous tent-camping towpath hikers and bikers occupying the grassy area by the Superintendent's historic house at the PawPaw canal tunnel, in addition to the several small-cottage users and bus-campers where Dave/family spent the night. We wound up driving to Cumberland for supper.

One also hopes the slope stabilization project just downstream of the tunnel will be completed by the end of the year and the towpath reopened.

For those with young legs or ebikes, one could consider pedaling from Cumberland towpath Mile 184.5 to Hancock Mile 124.5 which has a Super8 Motel plus Weaver's and Buddy Lou's Restaurants. But doing a metric century on the towpath might be a bit daunting, esp if recently rained on. Ending the tour at Cumberland, and spending a few hours visiting the C&O Canal Center or taking the Western MD sight-seeing train to Frostburg might be of passing interest. https://www.canaltrust.org/pyv/co-canal-visitors-museum/


I got a lot of my ideas from this CGOAB journal

Note the comment on the trail out of Jewet. "Conotton River trail [north from Jewet] was a bliss"

RWGPS distinguishes between paved and unpaved trails, irrespective of whether they are designated bike routes or not.  When they are, they are of course highlighted a blueish purple colour.

We are going to have to study a lot more of those sections we have not ridden or are not on OSM Cycle plans. Since your plan is tied to the trails near Massillon, it is best we quickly review them. I looked at photos of those trails and I think they are not suited for our road bikes. They are similar to the C&O and our last experience did not go well.


WV reminded me that I've further re-jigged my proposed September 2023 itinerary. In its current incarnation, it:

* incorporates a ride north across Kentucky that is similar to but less ambitious than MA2012;

* extends the trail elements further north across Ohio on the Ohio to Erie Trail;

* largely reverts to the common MA12/R2DTI route east from Weirton;

* includes a rest day that reflects the H2O experience.

All combined in map format at: Ride with GPS | Bike Route Planner and Cycling Navigation App

Bob, Here is a reference you may wish to examine around Bolivar.

I am seeing similar as you. Mine is below. 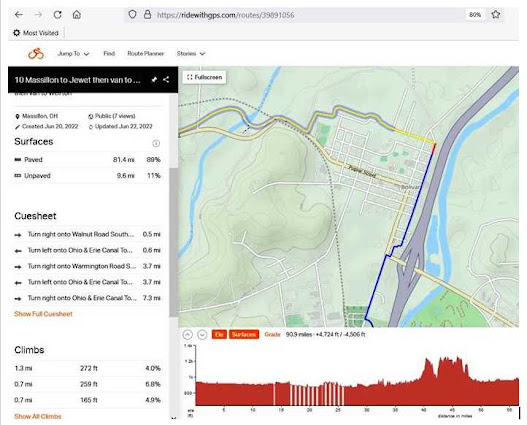 I wonder if we're viewing similar images on RWGPS?

As you'll see from the screenshot below, in my 'Edit' version both the LH side panel and the elevation profile provide info on the paved and unpaved sections.

The RH side panel shows some of the available map types, including OSM Cycle and OSM Outdoor.

The map itself shows the paved OTET (Towpath) in yellow as it approaches Bolivar and my continuation into town, also in yellow. The southerly continuation is marked organically in blue, i.e. initially there is no OSM Cycle overlay to indicate a designated trail until it becomes unpaved again, once it proceeds further south as the Towpath and is again designated as such by OSM Cycle.

Are you seeing this type of information on RWGPS? Apologies if this seems pedantic but I'd hate us to be talking at cross purposes as we proceed. 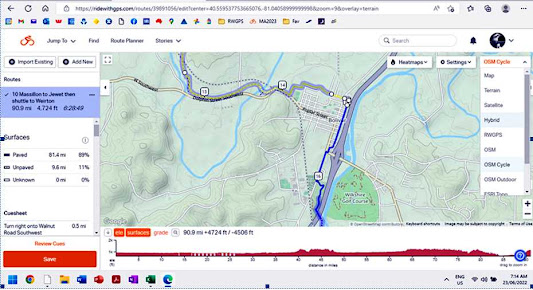